Please welcome Louisiana author, Ryder Islington, who’s novel Ultimate Justice, A Trey Fontaine Mystery was recently published by LL-Publications. Ryder shares her circuitous journey to finding the right publisher for her mystery series and some of the advantages of going with a small press. Ultimate Justice is available in print and ebook through LL-Publications and through Kindle and most major ebook retailers. You can find out more about Ryder at her blog.
Posted by About Lori Cronwell No comments: 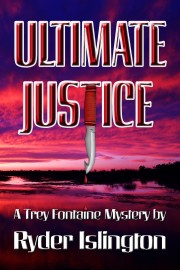 So what’s next? Well, I’m working on book two of the Trey Fontaine Mysteries, while I work on the next horror of it all: promotions—Facebook and Twitter and blog tours, oh my!
Posted by About Lori Cronwell 1 comment:

Liv Rancourt talks about promoting her debut novella, A Vampire’s Deadly Delight
I’m pleased to host Seattle author Liv Rancourt, whose guest post appears below. Liv is a writer of speculative fiction and romance. Her paranormal romance novella A Vampire’s Deadly Delight was published this month by Black Opal Books. Liv will share her seven steps to getting known as an author.
Posted by About Lori Cronwell No comments:

Seven Steps to Getting Known as an Author 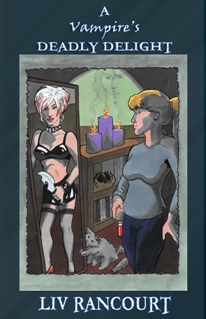 I’ve heard that people have to see something seven times before it sticks, and my plan to promote A Vampire’s Deadly Delight is built around that principle. I want to give readers multiple opportunities to get to know Liv Rancourt. To make that happen, I’ve taken seven steps to find my readers and help them find me.

1.    I built a blog – www.liv-rancourt.blogspot.com. I post two or three times a week, and try for a mix of writing-related content with stories about my life. The tone is generally humorous, because while I’m not a humor writer, I do like to make people smile. I target people who enjoy paranormal fiction, but try to include more general themes to interest a broader range of readers.

2.     I created a website – www.livrancourt.com. Using GoDaddy.com® and their web-building template, WebsiteTonight®, I’m building a site with information about me, my books, a link to my blog, at least one sample short story, and a subscribe form so my readers can sign up to receive direct mailings. The website is still a work in progress.

3.    I launched a Facebook page – www.facebook.com/liv.rancourt. Until two weeks ago, Facebook was the mainstay of my social networking. It’s a great platform for broadcasting my blog posts and for connecting with other writers and readers.

4.    I started using Twitter – www.twitter.com/LivRancourt. This is networking on steroids. It’s a huge tapestry of the human experience, with an emphasis on promotion. I haven’t been using it long, but so far I am impressed with what it can do and the connections I can make. You never know who’s going to see and broadcast something you’ve put out there.

5.    I have organized a series of guest blog appearances, and I’m beginning to host other writers on my blog. Beyond giving readers an opportunity to get to know me, my blog is a networking tool. The reciprocal relationships that these guest posts foster strengthen my ability to reach readers. I appreciate every one of those opportunities, and I strive to create posts that balance information, entertainment and heart. That said, it’s just as important for me to be a good hostess, because wherever I can I want to pay it forward.

6.    I am submitting A Vampire’s Deadly Delight to reviewers. The publisher, Black Opal Books, submitted the book for review at fifteen websites, and in addition, I’ve compiled a list of book review sites using Google searches, Facebook and Twitter. Over the next two months I will be submitting the book to sites that aren’t on the publisher’s list. I’ve also created an Amazon author’s page and will be encouraging readers to leave reviews on Amazon and Goodreads. Since each review correlates to an increase in sales, I’m aiming for at least half a dozen reviews on Amazon, and another half a dozen on Goodreads.

7.    I’ll take out a billboard on the corner of Hollywood and Vine. Not really, although realistically you might expect me to say, “I’m arranging for readings at bookstores and libraries.” Well, I’m not. Yet. For now my focus is on selling ebooks. But once I sell 100 copies of the ebook, I’ll work with the publisher to do a print version and then I’ll set up some appearances.

Any good plan needs concrete ways to measure its success. Besides sales, I’m tracking my blog hits and website views, and using that feedback to evaluate the effectiveness of my plan. This is my trial run, and I expect to learn plenty about what works and what doesn’t.

A promotional plan takes time, which means time away from writing. Yet I believe the investment will be worth it. I want to thank Lori for the opportunity to post on her blog. She’s an excellent marketing professional, and I’ve learned so much from her. This is all an amazing adventure. Thanks for sharing it with me.